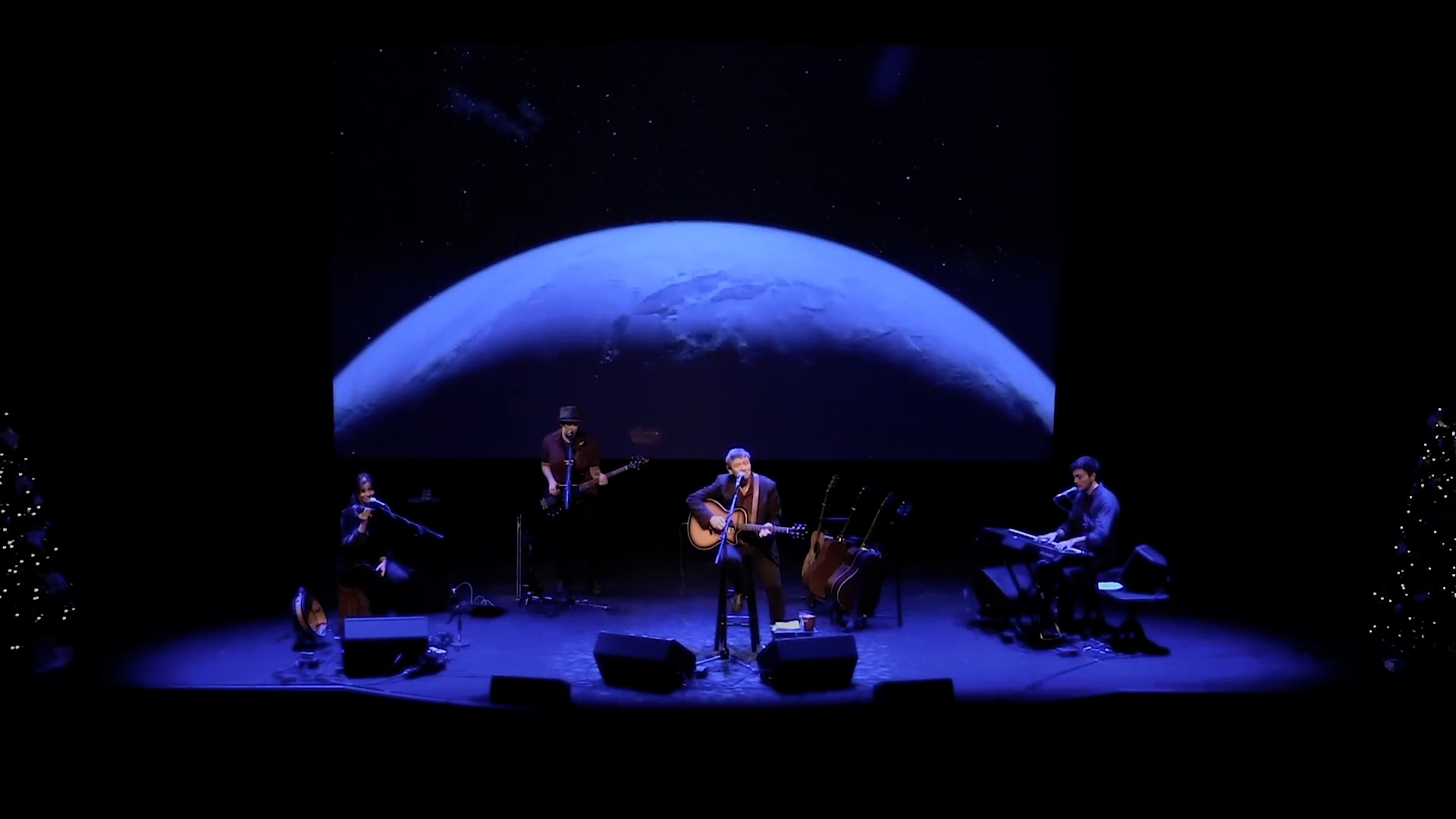 Back by popular demand, Lennie Gallant offers the fifth edition of his wonderful "Innkeeper’s Christmas", presenting Gallant's original songs for the Season.
Released last December, "Christmas Day on Planet Earth", Gallant’s first recorded offering for the season, received rave reviews. The live multi-media performance, featuring his stellar band and the projection of inspiring images and videos, always draws standing ovations.
A truly inspiring Holiday feast for the ears and the eyes, Gallant’s show takes you not only on an emotional voyage, but also a geographical one with songs that are set in the Middle East, in South Africa, on a street in Paris, a Sequoia forest in California, a hospital ward on Christmas eve, and at a good old fashioned East Coast Christmas kitchen party!
BUY TICKETS HERE

A New mid-August Music Festival in a Magical Setting in the Heart of Wolfville !

Everything on sale NOW at the Acadia Box Office

A 2022-23 Series that sees the return of World-Class Singer-Songwriters, Ballet, Opera, Jazz, Symphonic and Chamber Music to Wolfville!

(August 29, 2022) The inaugural BACK TO THE GARDENS took place during the August 13-14 weekend on the Acadia University campus.

Due to adverse weather conditions, the festival was moved indoors at the eleventh hour to a “greened up” Convocation Hall. Although the big stage erected in the beautiful Harriet Irving Botanical Gardens remained elusive, Back to the Gardens presented a wonderful community of Artists from near and far, coming together in harmony to create and perform. They delivered beautifully!

The Acadia Performing Arts Series thanks its Back to the Gardens partners within Acadia, and its major founding community partners, Just Us Coffee, EOS Natural Foods and Rewind 89.3, for their support. Major thanks also to the BTTG production team and to the community of volunteers who made the weekend’s concerts unfold perfectly. Last but not least, kudos to all the remarkable Artists who performed at Back to the Gardens. As the audience can attest, musical magic was made!

As September begins, the Acadia Performing Arts Series now invites you to Acadia’s Festival Theatre and Convocation Hall for its annual Fall to Spring Series. It begins on October 1 with “la Grande Dame” of Canadian jazz, pianist Lorraine Desmarais and her trio.

Series’ subscriptions at a very advantageous price, as well as tickets for each event, are available at the Acadia Box Office. 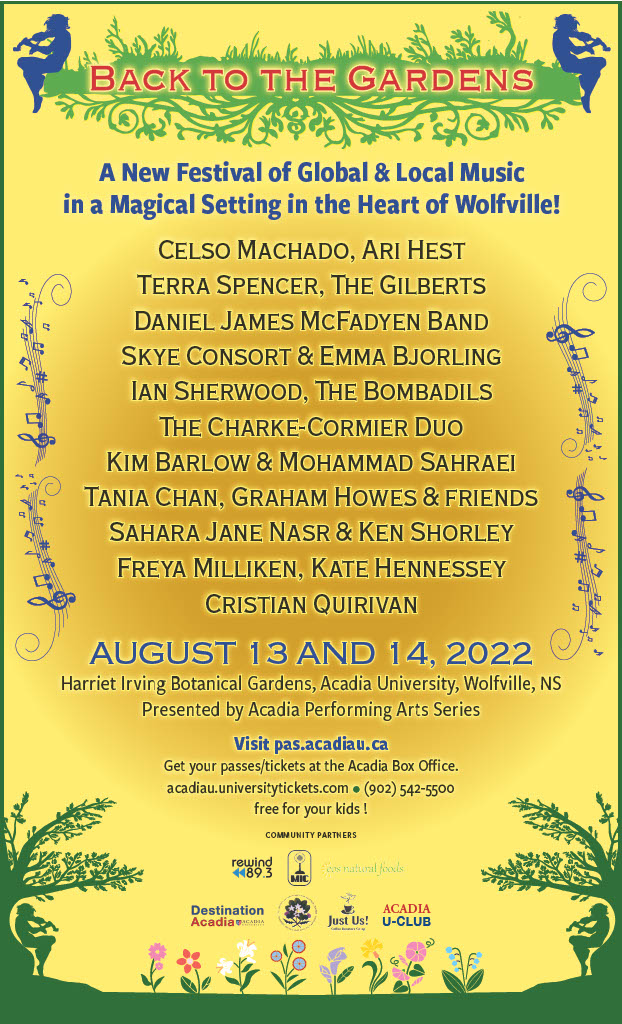 DETAILED "BACK TO THE GARDENS" SCHEDULE : 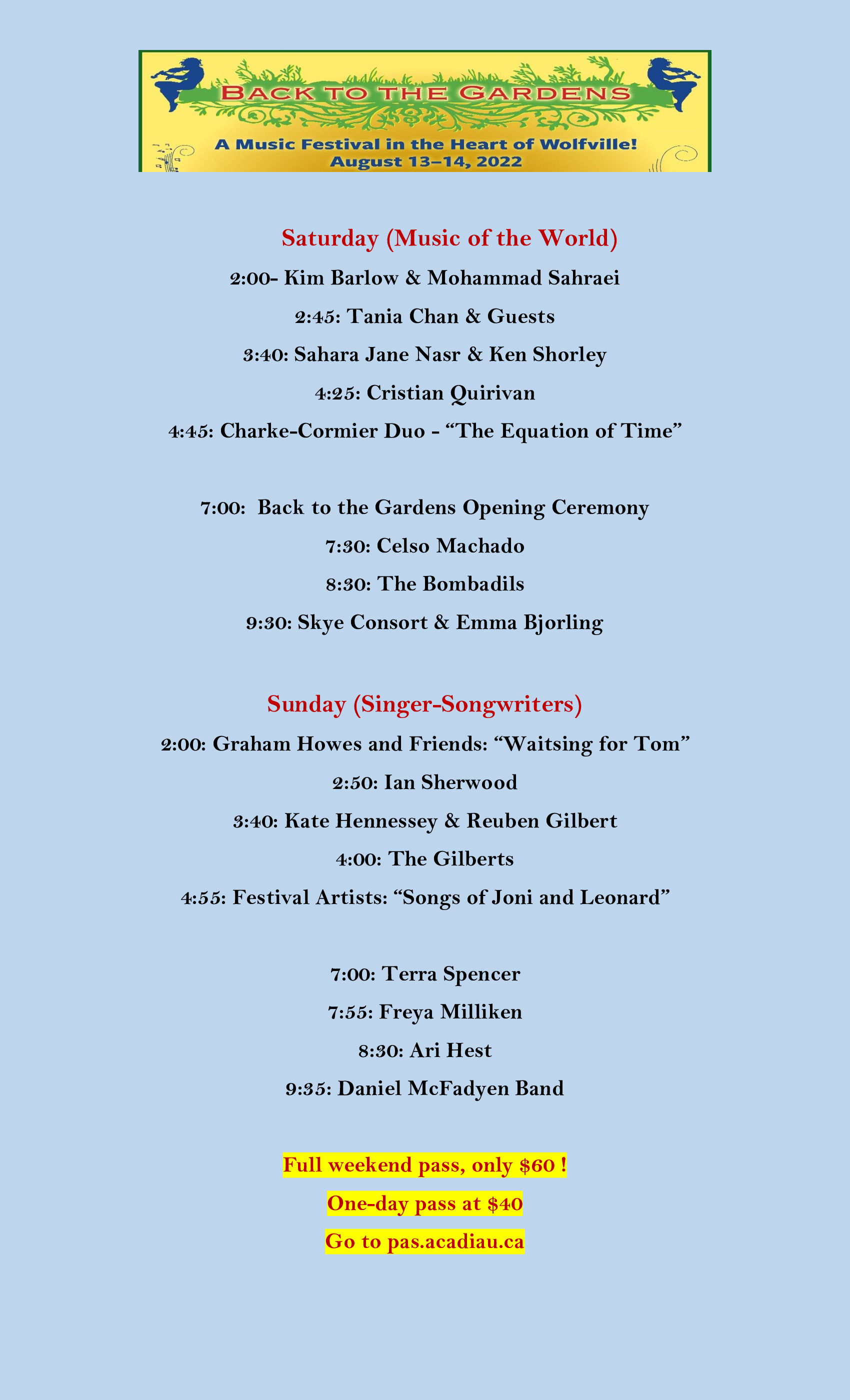 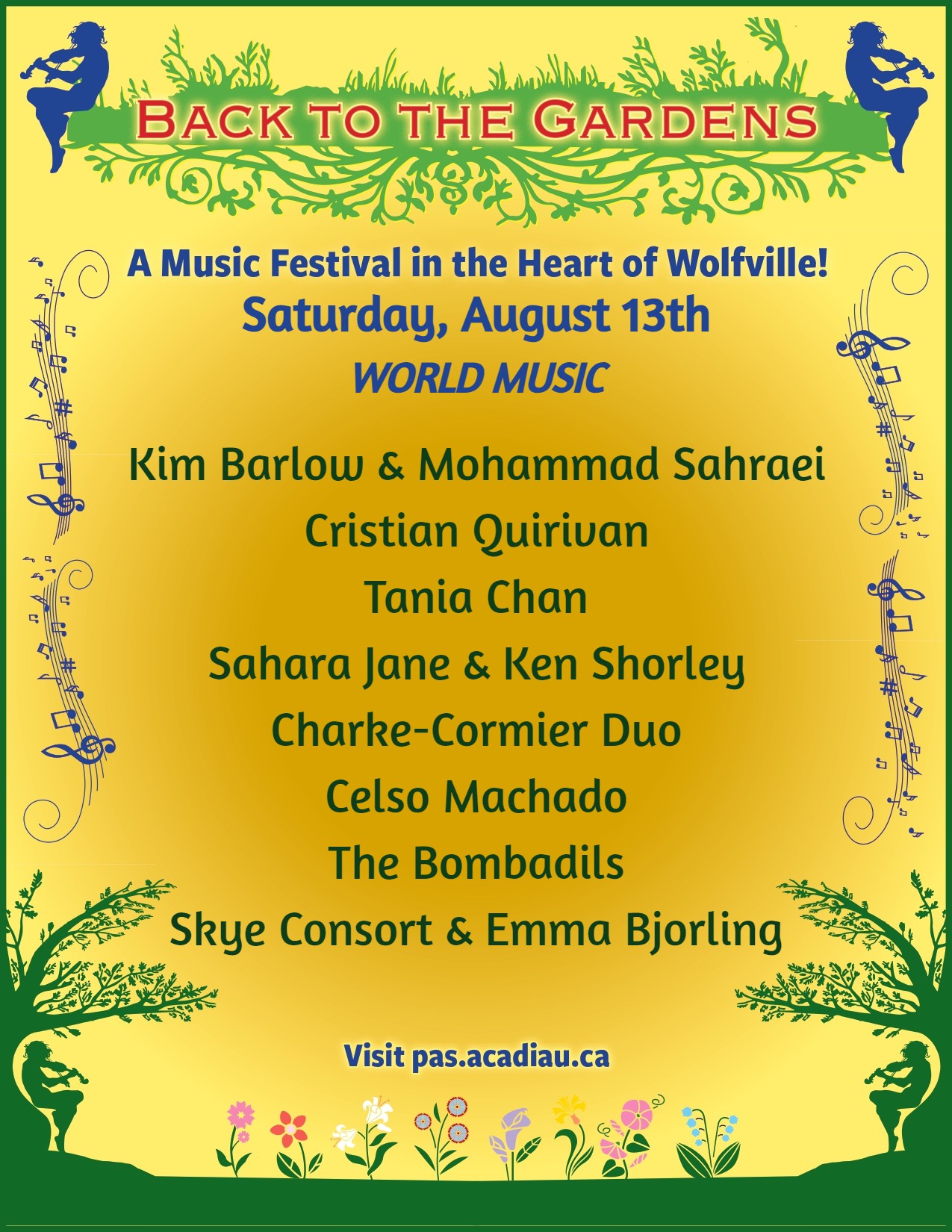 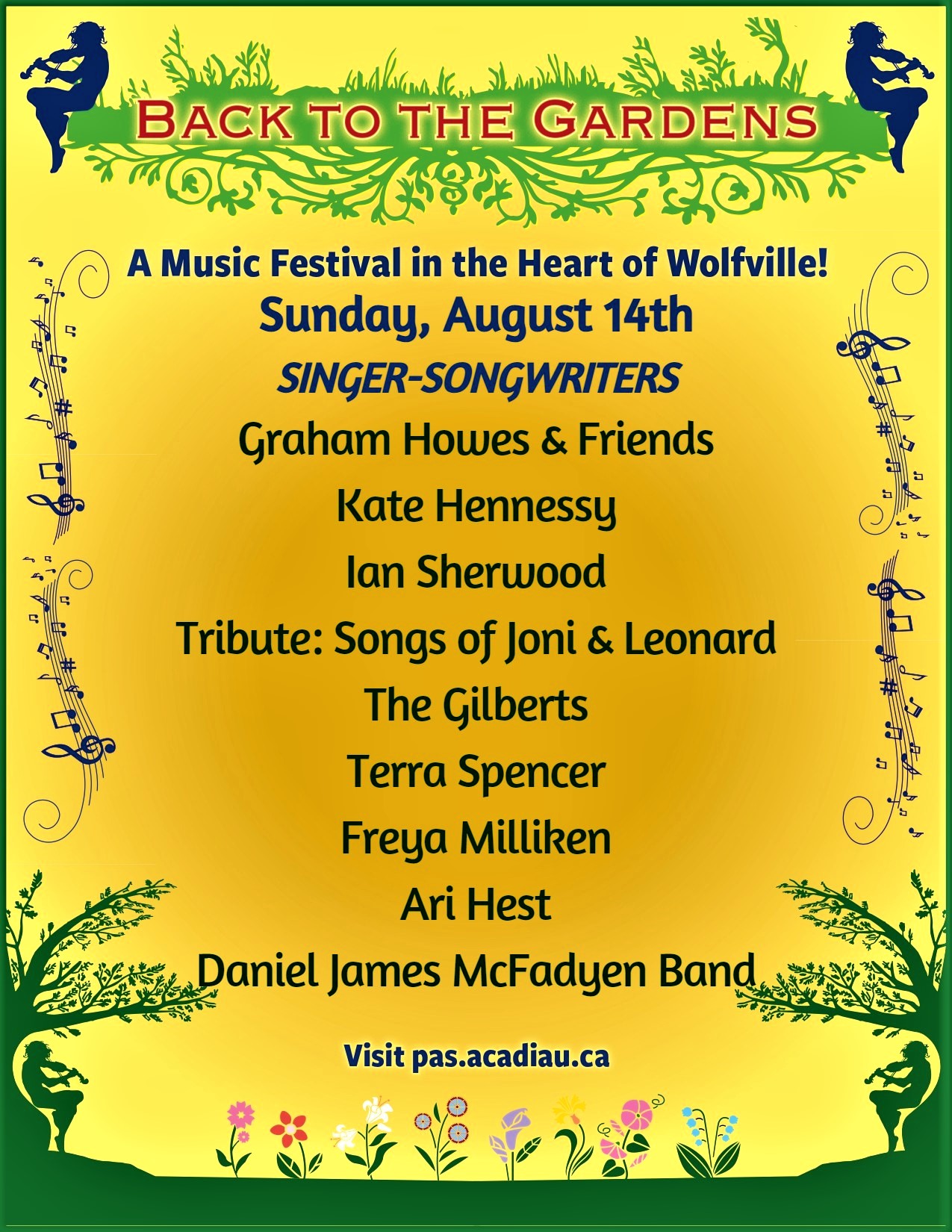 Before Back To The Gardens, we have a wonderful special concert on July 25 ! MARY GAUTHIER ! 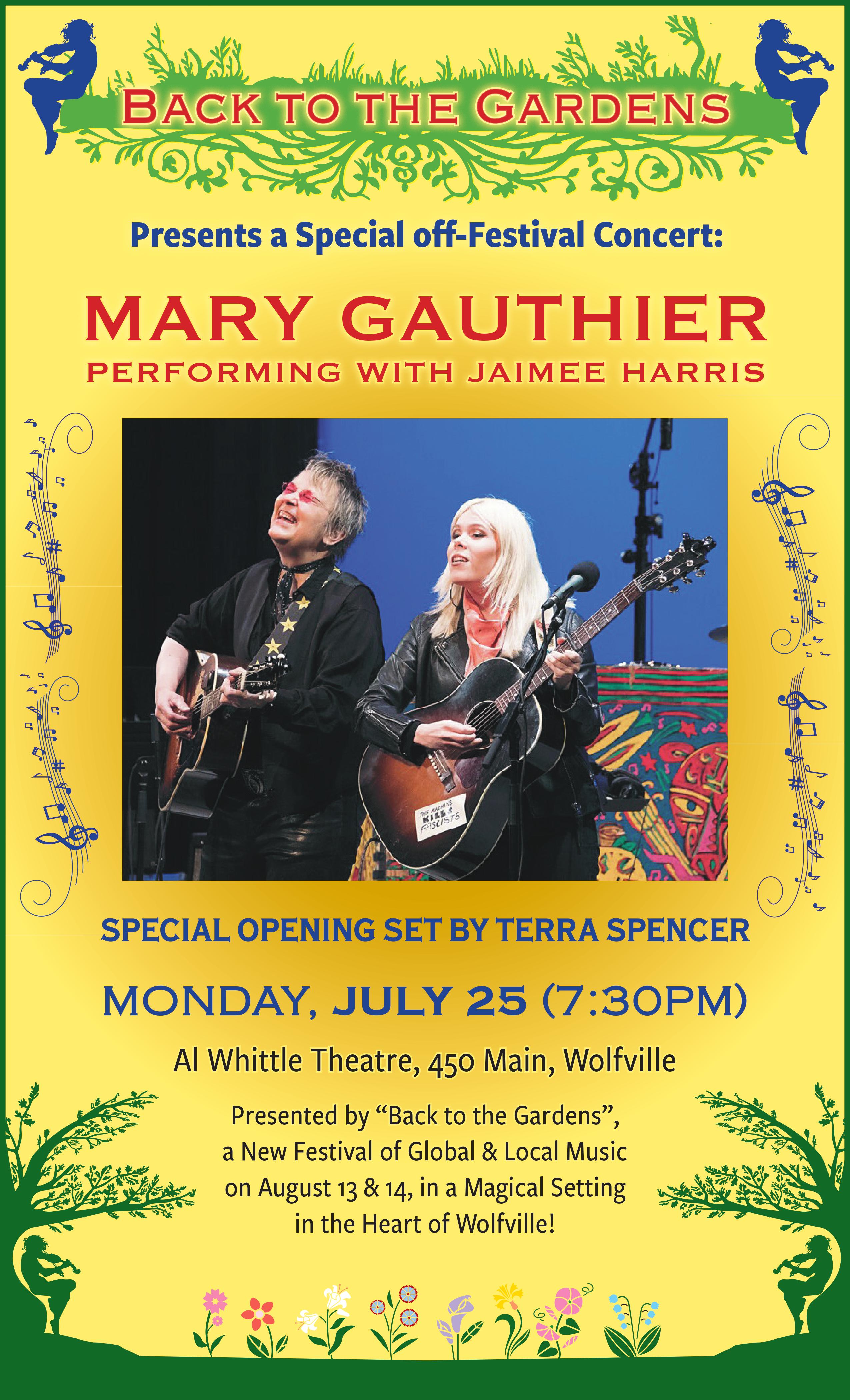 We can't wait to see you back !

and a New Music Festival in a Magical Setting in the Heart of Wolfville !

Programs, artists and venues are subject to change without notice.